Future Champions student intern support- where are they now?

Future Champions student intern support- where are they now? back to News

Future Champions has been a great success since its launch in 2010 providing support to talented, aspiring, young sports people to achieve their goals. As a measure of the support received through our partners including Tees Valley Community Foundation, local authorities, Tees Active, Everyone Active, Teesside University and local Rotary clubs, 64 young people are currently representing Great Britain and the Home Nations at junior and senior levels.

A key aspect of this support has been the experienced team of Teesside University staff and student interns who work on a weekly basis with the young athletes. The Future Champions are able to work with qualified and trainee physiotherapists and strength and conditioning coaches which in many cases this has given them vital support at a critical time in their development. It is something which most would not be able to finance independently and in many cases it has made the difference needed for them to excel in their sport.

The excellent relationship with Teesside University has flourished in recent years particularly on the student experience and employability front. The student interns gain valuable and unique experience working with the young elite athletes of the Future Champions programme which sets them apart from their counterparts when applying for jobs.

The strength and conditioning and physiotherapy support is only partially funded and made possible through a significant amount of additional volunteer time, commitment and expertise from University personnel and students. Students alone provide over 1600 hours of their time each year. Many are quite simply passionate about helping young people to grow and succeed.

Following the great experience of working with Future Champions, there are a number of interns who have gone on to be successful in strength and conditioning roles at high profile sports clubs and organisations; 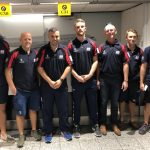 Mihkel Laas supported Future Champions from 2012 and is now employed as Athletic Development/Sports Scientist at Pro Sport Support specialising in athleticism development for youth football players and is based in Huddersfield.

Umran Shelmani worked with Future Champions from 2015 and is now working at the prestigious Soto Grande Tennis club in Madrid, Spain 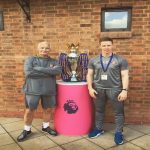 Matthew Brown was involved with Future Champions from 2016 and also supported the development of our Young Champions project. He now works with Paris St Germain FC, in France working alongside famous players including Neymar and Mbappe.

Louis Cunningham boxed as an amateur at international level and provided support to Future Champions as an intern over a number of years. He is now employed as a strength & conditioning coach at Sunderland AFC

Dominic Ellington has worked with the GB Rowing team at the European Championships in Switzerland over the summer.