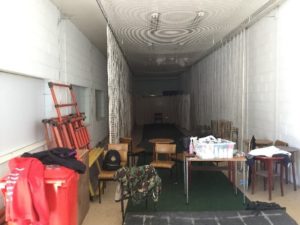 Stockton Cricket Club were in need of funding so they could regenerate their indoor net facility, which was opened in 1993 by ex- England star David Gower. The facility has been well used by thousands of local cricketers over the past 25 years, but it was really time for an upgrade. The club have three senior teams that play on a weekend as well as under 11s, 12s, 13s, 15s and 17s. With better training facilities they hope that their teams can improve and compete to win more titles on the field.

After approaching Tees Valley Sport the club applied to Volunteer It Yourself (VIY) who offer sports clubs and organisations the opportunity to apply for funding linked to the engagement of teams of volunteers. This is funded through Sport England and national sponsor Wickes. The club are working with Stockt 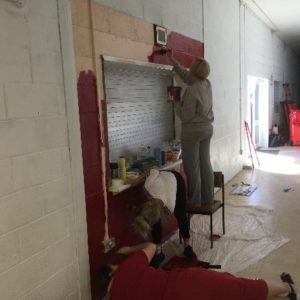 on Riverside College through the Princes Trust, recruiting an enthusiastic group of volunteers to help them work on the indoor net facility improvement as part of the first phase of works.

Melisa Marsden, Princes Trust team leader, quickly pulled a team of volunteers together and headed down to the club and started work.  She was keen to take on the project as she has an avid interest in cricket through involvement in her local cricket club in County Durham. She recognises the hard work that goes into running a cricket club, and the problems associated with maintaining and improving facilities.

The young students from Stockton Riverside College are part of the Princes Trust organisation who target student volunteers to carry out work on a local community project as part of their course and decided to select the cricket club as they were keen to support a project in their community as many of the students lived locally. The work involves internal re-decoration and the creation of internal and external cricket murals. Local tradesmen will also be installing new lights and ceiling as part of the project funded through Wickes and the VIY programme.

One of the students Chloe Howe who was given the team leader role decided to work on the project as she had a big team behind her and it was “an exciting project so it was perfect and it meant everyone had a role”.

The students also researched design options for the cricket murals and secured additional funding through North Start Housing to help fund this element of the project. Assistant team leader Christopher Smith who’s also an artist is coordinating the mural work that involves images of batsmen, bowlers and fielders set on a cricket field. Chris has enjoyed his time working at the cricket club and said ‘We picked this project as it will have a massive impact on the club and area, it also creates a sense of achievement for the student volunteers when the work is eventually completed 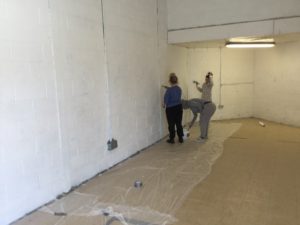 Club Chairman, Gordon Lake, is delighted that his club has been lucky enough to gain funding through VIY and Wickes and has really welcomed the involvement of Riverside College students. He said ‘Being able to improve the indoor net facility and potentially using the building for different activities is brilliant. The next step is carrying out a variety of tasks that will be led by tradespeople and club volunteers, especially from our junior teams. We now have a great link with Stockton Riverside College and the Princess Trust and hope to involve them in future projects at the club’.

If you are a club or an organisation what are looking for a helping hand from Volunteer It Yourself, you can apply with this application form https://xanderb.wufoo.eu/forms/viy-sports-club-project-pilot/