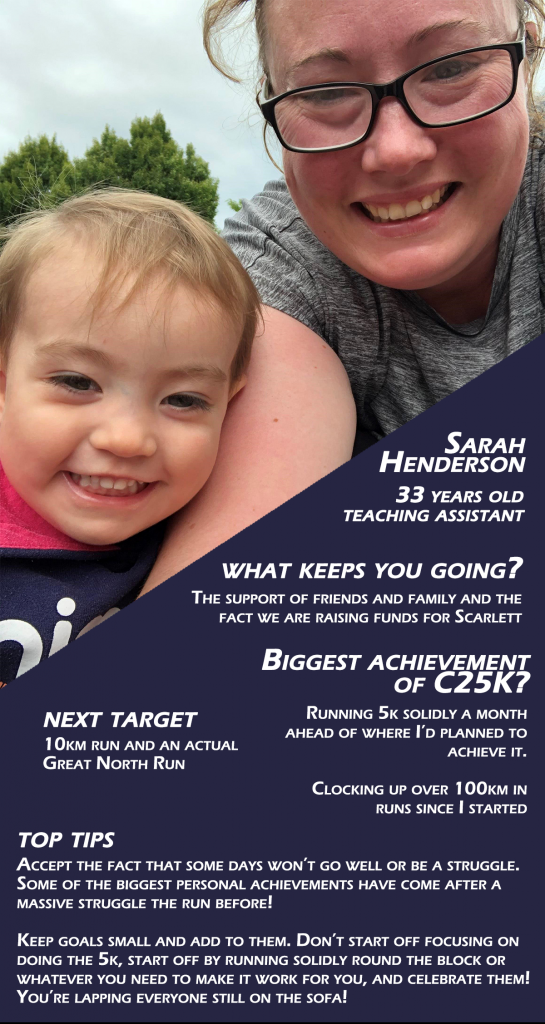 Exercise had always been a struggle for Sarah as confidence and consistency were big stumbling blocks especially since giving birth to her daughter Felicity. The Couch to 5K programme gave Sarah the structure she needed to get regular exercise with achievable goals.

Sarah took up the challenge to improve fitness, lose some weight and help reduce some anxiety she had been experiencing for a long time. It was also very important to Sarah to set a good example to her daughter. Sarah said, “since her birth my own health and well-being had become more important, I wanted to be a positive role model to her.”

“I have always done some extent of exercise such as going to the gym or walking, but I wasn’t often consistent. I would start a programme or aim to go a certain number of times a week to the gym and it would quite often tailor off after a few weeks. I always seemed to find an excuse or prioritise other things.” This time has been a different story for Sarah and her family as they have attacked this challenge together. They managed to find a free second hand running buggy online and they replaced the wheels to make it functional. This meant that childcare was no longer a barrier and both Phil and Sarah ran circuits in the park taking turns with the buggy giving the whole family some time outdoors exercising with Felicity cheering “come on Mummy” from her buggy along the way.

The support of husband Phil and daughter Felicity has spurred Sarah on no end. Phil gave her the initial push and confidence that she could do it and this support network grew to help Sarah along her journey. Sarah managed to complete her first 5km run a whole month ahead of the scheduled plan. Not only that but Sarah signed up to complete the Great North Run Solo challenge of completing 40 runs by 13th September. A group of friends decided to do the challenge in aid of raising funds for a family friend, Scarlett, 13, who has osteosarcoma and has been undergoing treatment for the past year. This has been extra motivation for Sarah who said, “Let’s face it if a 13-year-old can do that, I didn’t have much of an excuse not to put my trainers on!”

“I just wanted to lose weight, but as I went out more and more I started to see the positive effects of running on other areas, such as my confidence and mental health as well as realising I had the ability to see the plan through.” This aspect of running has given Sarah greater confidence in herself. So much so that on one run she had her headphones knocked off her head by a teenage boy when out running one day, “which shook me up”. This would have previously been the end of Sarah’s running, but not this time. Sarah’s newfound confidence and grit saw her venture back out the next day on that very same route. The extra support and motivation from her husband and the group of supportive friends running for Scarlett, Sarah openly states “that would have been the end of my training without a doubt and I’d had had my confidence totally knocked.”

Even though lockdown restrictions haven’t allowed for social gatherings the whatsapp group set up for the GNR Solo has helped Sarah throughout. “I knew all the people in our little WhatsApp group beforehand, but I’ve got to know them all a lot better and they’ve really supported me in continuing!” Sarah now aims to continue her running and aims to complete the 100miles of the GNR Solo in her 40 required runs and pledges to continue to “run twice a week, to maintain and improve fitness and help weight loss.”

“I’ve enjoyed doing it, even when it’s been tough”, and through a few minor injuries when Sarah struggled with shin splints for a few weeks but she just adapted her training by using a cross trainer occasionally to stop having her feet hit the floor as much while she healed. “I’ve seen a massive improvement in my mentality and motivation in general life, it’s pushed me to take a few more risks and explore other things I want to do too!” It’s given Sarah strength when there’s negativity around when “some people believing I’d never do it. I still think some family and friends think I won’t finish. I’ll show them!” 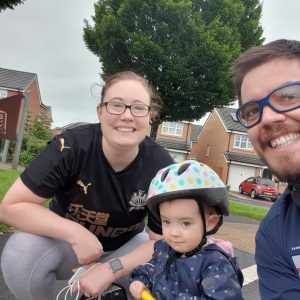 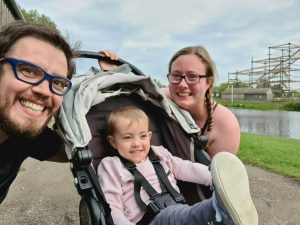 What would you say to anyone contemplating starting this C25K challenge and needs that extra push?

The WhatsApp group we created helped with this massively, everyone has different goals, paces and abilities, but we all support each other and cheer each other on. Whether it’s the girl who I honestly think could run the world, or initially when I was trying to struggle through my first mile. We’ve all been there for each other.

Use technology if you’ve got it, my fitbit and strava helped me track everything so I can physically see myself improve and I used the couch to 5k app at the start with my favourite comedian voicing it, which really helped me pace myself.

Find a place you like to run and have a back up plan if you need it (I’ve used the gym to run in when it’s been horrific weather or I’ve been struggling with my shins!).

Keep goals small and add to them. Don’t start off focusing on doing the 5k, start off by running solidly round the block or whatever you need to make it work for you, and celebrate them! You’re lapping everyone still on the sofa!

Have you got a story to share with us? Do you know someone who has been amazing through lockdown and want to shout about them? If so, we would love to hear from you. Email us info@teesvalleysport.co.uk or message us on social media.